10/31/2010 Wyatt and Patriot had a great weekend doing NADAC agility. We had a slow start Saturday with the boys at Play-Bow NADAC agility in New Paltz but rocked the end of the day with 5 straight qualifying runs in Jumpers, Hoopers, and Tunnelers, all firsts except 1 second. On Sunday, we had another great day with Wyatt and Patriot. Wyatt and I were one of 2 qualifying runs in Elite Chances and earned our 5th Elite Chances Q. 8 more to go for the MEDAL. Wyatt also had the fastest Tunnelers time of all dogs in Elite Tunnelers and qualified in Weavers. He had an awesome weekend. So much fun to run this dog. What a blessing! Photos

John and Wyatt in the Greenfield Recorder competing at the CPE Nationals. Headline is Can-Do Canines. Text is Above: Wyatt the Whippet jumps through the tire obstacle at the end of his agilityrun followed by his owner, John Heffernan of Conway, on Friday afternoon at the Franklin County Fairgrounds. The national competition continues on Saturday and Sunday and is free to the public. 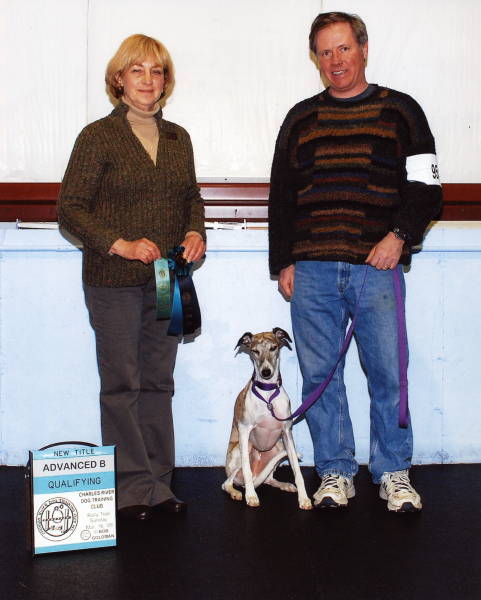 Patriot and I earned a 2nd place with a score of 190 in a large Novice B class of 20-30 dogs. Patriot also earned highest scoring dog with an LC title. Win Photo

Wyatt and I are still trying for out first CDX leg. We are having some fine runs but just missing one little thing. Seems like he is spacing our briefly and missing the initial command. This time, it was on the retrieve on flat, something he has never done before! Click here for a video.

Wyatt and Patriot Rally Video – Wyatt got a 99 and a 97 at this trial.

NEWC Meet and other Casuals – July/August 2007

June Baby and Dog Photos – Some photos of Aidan and the dogs playing outside.

Wyatt NADAC Elite Regular Run – May 7, 2007. Wyatt qualified and got second place but, best of all, seemed to have recovered from his back injury.

Patriot and Puppies – some photos of Patriot and his get Major, Willow, and Dash at one year old.

Wyatt Rally Video – Here is a video of Wyatt doing rally. He earned his RE recently and is going for his RAE. In Springfield in April, he earned 2 double Q’s scoring 93, 94, 96, and 97 with one fourth place. Nice going, Wyatt.

Patriot Earns His Agility Championship On February 5, Patriot earned his CPE agility championship. Dawn and Patriot worked for many years on this, forming a close and motivated team. Patriot earned about 90 qualifying runs, placing in most of them, to earn his championship.

Aidan Photos with some of Patriot and Aidan

Wyatt and Patriot have been competing in agility and obedience. They both now have 2 legs towards their CD. Patriot received 2 legs recently including a third place. Wyatt received one leg and a third place with an amazing performance and a score of 190.5! They are working steadily towards their CPE CATCH titles. Patriot recieved his novice regular NADAC title and Wyatt received his novice jumpers NADAC title.

January, 2006. Patriot ended up the year 36th nationally in AKC conformation. We are very proud of his standing especially since he was spending most of his time doing agility, obedience, coursing, and racing. 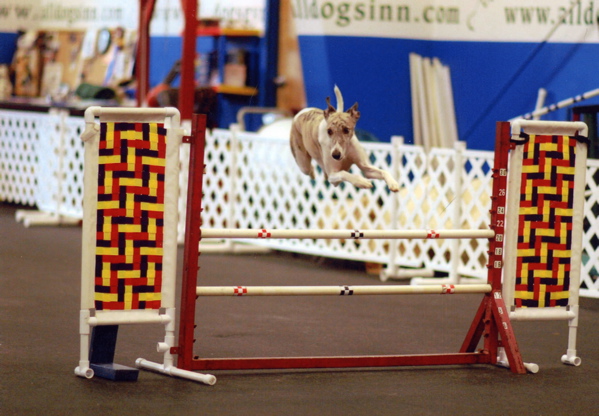 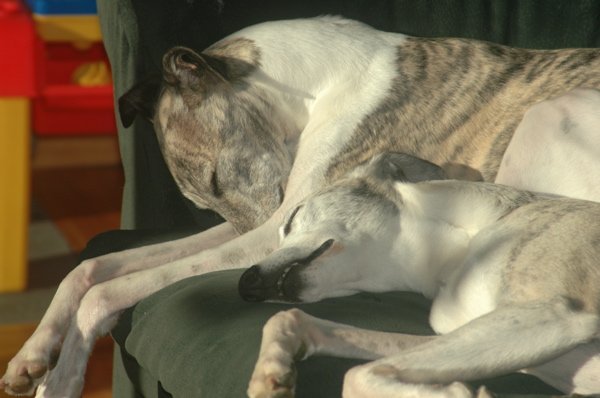